In Defense of Organic Structure Types (ENFJ and INFJ)

Organics are the true grassroots campaigns of the world. Often times more parts idealistic than otherwise, Organics are the type of people that feed on personal growth and the relationships they cultivate along the way. Whereas other types may be more driven by things with tangible or material potential, Organics find themselves craving confirmation that their existence on this world is meant to help others or make a difference. It’s bubbly, it’s charismatic, it’s…exciting, to be around an Organic. Their fluidity in self and in their place in the world brings peace and comfort to those that come close, as they usually help others realize the simple beauty or big picture of the things around them. They’re never done learning, as they come to realize early on the abilities they have to turn experiences into sense.

Organic Structures are a sparse population, but one with a very powerful presence nonetheless. This comes mostly due to their natural inclination to be an oxymoron of sorts — someone obsessed with the beauty around them and of experience, but that believes in organization as the catalyst of said experience. These people calculate their moves down to the minutia, from their daily routine to their plans in life. They still believe that the only way to truly understand something fully is to experience it, but they believe in their ability to control the world around them and how it impacts their lives.

Being someone so attentive to detail yet in-touch with the fluidity of life comes with clear benefits. The determination to experience and to learn leads Organic Structures through a myriad of life experiences and trials, ones that often leave them more and more enriched and seasoned as a person. They often have an understanding of the people around them and their feelings as well, channeling their empathy and bank of experiences to relate to those of others. This heightened sense of self that Organic Structures have often leads them to positions of power, or at least high influence, whether they’re in charge or not. They call on their ability to understand the world around them to try to best calculate what it needs that they can provide. 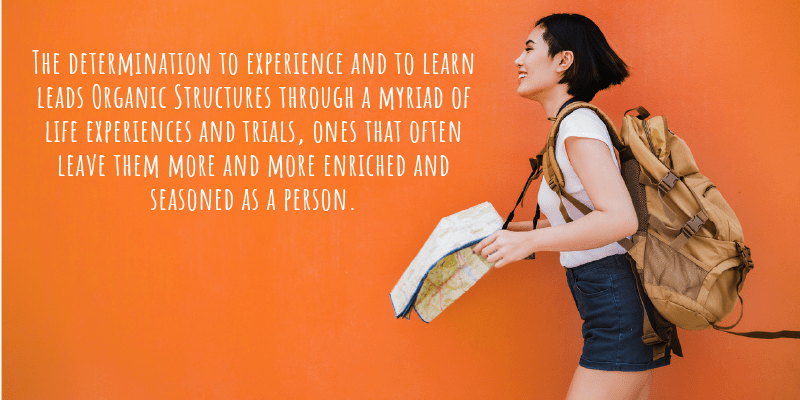 This oxymoron of sorts does come with its downsides, however. It’s not uncommon for Organic Structures to be at odds with themselves, as their desire for order can get in the way of their appreciation of chaos. Plus, their obsession with experience can often lead them down odd paths or get them in trouble — curiosity getting the best of a genuinely curious person. So long as Organic Structures stay in touch with themselves and the world around them, though, they can continue to feel at peace and to do what it is they are on Earth to do: change.

Some examples of famous or prominent extroverted Organic Structures (ENFJ) are:

Some examples of famous introverted Organic Structures (INFJ) are: