In Defense of Smart Freedom Types (ENTP and INTP)

Smarts boast an intuition and cleverness that gives most of them the suspicion that they are one before they verify it with the quiz. Smart Freedoms make up the majority of the two Smart types, but just barely — 6% vs. the 4% that are Smart Structures in the world. They’re the chaotic counterpart to Smart Structures’ organization, but still make up most of the profound change and game-changing ideas in the world. Like Structures, Smart Freedoms find themselves holding everyone around them to high standards, and thus expect the same of themselves. This internal drive burns slowly within them, fueling most of their passions and goals. They’re curious and adaptive, with the ability to shape themselves to the environment around them and encourage others to move with them. Depending on their social inclinations, Freedoms seem to naturally attract others to them, especially those who want to reject the norm a bit more. This makes them particularly fit for leadership positions, especially ones that they didn’t really want but find themselves in anyway.

One of the defining features of a Smart Freedom’s personality is their vision beyond what is right in front of them. This can manifest itself in boredom in the more monotonous aspects of the world and life, such as basic household routine, all the way to creating the exact path they expect to see from life. This can also become their greatest personal flaw, as their rejection of routine or proper scheduling and organization can create very haphazard habits. Despite the relatively chaotic methods they may use to accomplish their goals, they accomplish nonetheless.

Smart Freedoms can often find themselves subject to their own morals and ethics, as they try to hold themselves to the strict standards they set. The more spontaneous and fluid parts of their personality can be at odds with these codes, especially when trying to grow and change in major ways. “Chaotic” doesn’t always mean disorganized or spastic, either. While they do feel the explicit need to experience things to understand them, Smart Freedoms spend a lot of their alone time analyzing and playing out scenarios before acting, actively deciding what is necessary to experience in order to better understand the problem or task at hand. 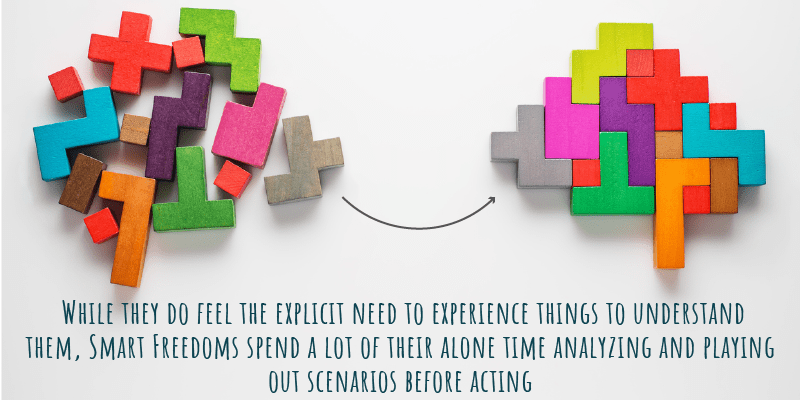 While Smart Structures are the types of people who will end up president, CEO, and more, Smart Freedoms usually make up the likes of our creative directors, whose ideas are instrumental to the same high level of achievement Smart Structures usually find themselves in charge of. Smart Freedoms like to look beyond the expectations set for themselves, and instead find ways to individualize their experiences and their places in the world on their own. What everyone else does is of little importance so long as they feel like they are using their attributes in their best way possible.

Some of the extroverted Smart Freedoms of the world include:

Some of the introverted Smart Freedoms of the world include: