Have I Gotta Diet for You! 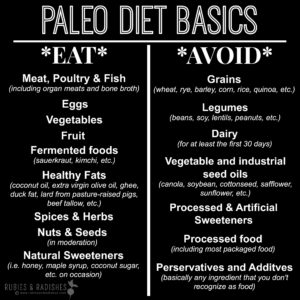 So Kelly wanted me to write about this “new” Paleo diet and I groaned inwardly. I despise diets no matter how new or old. Most advocate eliminating one of the food groups I love like cheese, bread, dairy, sugar, and bacon*. Yes. That’s MY diet and it’s why I’m a good 30 pounds overweight. If I took out just one of my food groups I’d lose five pounds in a week. So which personality type is going to do best on this caveman diet?

I’m thinking that Paleos will be the kind of people who like to go on hikes and make sure to go on outings to museums or farmer’s markets every weekend. So probably extraverts and Funs and Classics who have decided that other people actually do this sort of thing.  Y’know the kind of people who in caveman days would enjoy foraging for berries and truffles and nuts and spearing antelopes. Okay, I know this isn’t a scientific or even a good personality type analysis, so let me think a bit harder.

Here’s what I think: It’s not the actual diet that determines its appeal to a certain type; it’s the fad or newness of a diet that’s going to establish the appeal. Smarts tend to be early adopters in the marketing world and so will be razzled and dazzled by the prospect of any new and “Smart” way to lose weight. Organics will be intrigued but will wait a bit to see if it works on anyone else first. Funs will be next to try it, but if it’s not practical they’re going to drop it after the novelty wears off. If it’s a good, practical and easy diet, then eventually the Classics will give it a go and more than any other type, they will stick with it and the diet will likely stick around too. (They are half of the population after all) Think Weight Watchers: The points make it just a little different from counting calories and they have all those meals you can get in the frozen section of your local grocery. Practical and easy.

So yes as an Organic I was intrigued by this Paleo diet, and I’ve heard of it working wonders on some acquaintance, but as bacon is a highly processed meat, and apparently a controversial no-no in the Paleo diet, I’m just going to have to take a pass, because bacon is one of my essential, and non-negotiable food groups.

*Yes, I consider bacon a food group, don’t you?