How an INTJ and ESFP Can Live in Harmony

We’ve all had someone we live with who we love dearly, but seem to always be bumping heads with! After years of working with cohabitating couples, we’ve learned a thing or two about the challenges different personality types face when they’re forced to share one space. It ain’t easy but with a little love and a lot of understanding and compromise even two types as different as an INTJ and ESFP can find a way to live in harmony. Here is how! 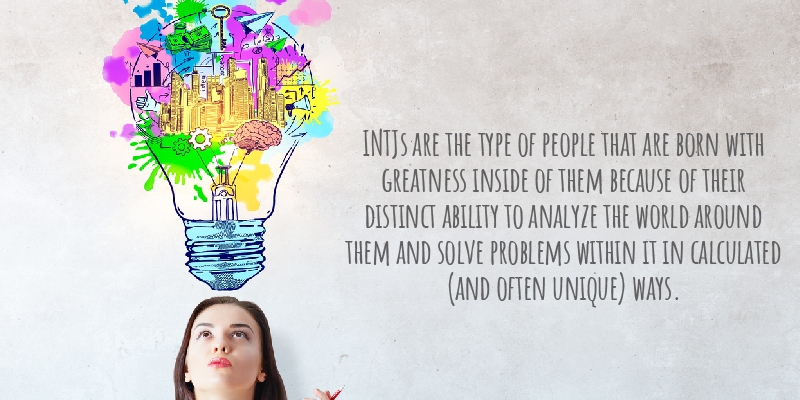 As most of you know, the Myers Briggs system was integral in our creation of the four pixie types. There are 16 different Myers Briggs personality types, all identified by different letter combinations. These letters are: E/I, S/N, T/F, and J/P. They stand for Extraversion versus Introversion, Sensing versus Intuition, Thinking versus Feeling, and Judging versus Perceiving.

If you’re an INTJ (Pixie Type: Smart Structure) it’s likely that you already kind of had a feeling about it. INTJs are the type of people that are born with greatness inside of them because of their distinct ability to analyze the world around them and solve problems within it in calculated (and often unique) ways. INTJs make up the smallest chunk of the population, stacking up to be about 10% of all people. INTJs are also the ones that make up most of the world-changers and leaders, and are usually the easiest to associate with high positions of power like president, CEO, creative director, and more.

While you may not be as outgoing as your ESFP housemate (more on that in a minute) you are actually one of the easiest types to live with because your organizational demands are flexible, apart from a few of the typical conflicts that come when you share a living space. You really don’t have too many problems with ESFPs. Sure, there’s the occasional organizational detail that may be lost on you that isn’t on them. Despite their fun loving nature, ESFPs can be more detail-oriented than you would expect.

However, the biggest issue an INTJ is going to have when living with an ESFP is time management. For as practical and detail oriented as they are, ESFPs still end up being late to just about everything. Remind them when there is an important event coming up, and stress how important it is that they arrive on time. If that doesn’t work, lie. If you have somewhere you need to be at 6:00, tell them it starts at 5:30! That usually does the trick. But what about in cases where the planning is last minute? Give your ESFP partner a deadline for when they have to have an answer to you. This is especially true if you are traveling and need to make arrangements.

Once you two get into the swing of things, it should be a pretty peaceful household. You’ll manage to keep things relatively clean because let’s be real here, neither of you are concerned with having a super tidy home. 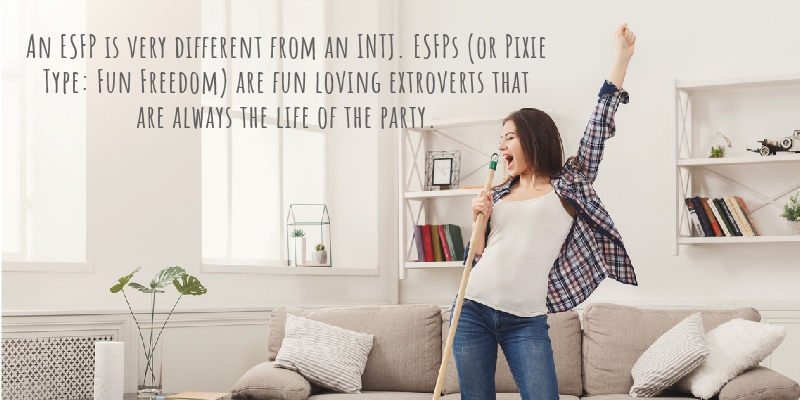 An ESFP is very different from an INTJ. ESFPs (or Pixie Type: Fun Freedom) are fun loving extroverts that are always the life of the party. They are very accepting of others and very open to differences. They love people of all kinds and usually have huge social networks. They are also incredibly compassionate and empathetic, open and funny. These are genuine people with a “go with the flow” attitude and they make for great friends.

ESFPs are great friends but do they make for a great housemate for an INTJ? As we mentioned up above, there shouldn’t be that many conflicts between ESFPs and INTJs, but some issues still need to be addressed. INTJs pay closer attention to the clock than an ESFP does, so the ESFP should give a time frame for their plan on being somewhere. An INTJ will be less annoyed if they’re not in limbo all of the time. INTJs are big-picture thinkers, so they’re more patient than other, more detail-oriented types. That being said, they do have their limits so try not to push it.

INTJs are very sentimental and have a harder time letting go of things than an ESFP does, so they accumulate more clutter. The limit for what an ESFP can tolerate clutter-wise is much lower than the INTJ type. In this pairing, the ESFP must learn to tolerate living with clutter, or be the impetus for decluttering, which means it might not happen as much as the ESFP would like it to.

Having problems with a housemate who has different organizational goals than you? Buy our book and learn how to bring harmony back your house!