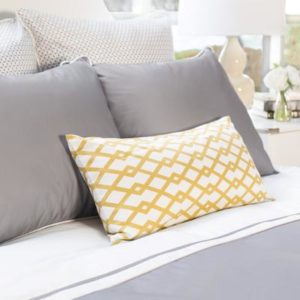 Dear K&K: I love the look of a nicely made bed but I just don’t have the time (energy??) in the morning. It also doesn’t help that she has a million pillows on it to boot. I realize that makes me sound incredibly lazy. But, there are just so many steps for me to do it “right” according to my wife. Any ideas on how to make it easier? Maybe compromised on 4 pillows? Signed: Sleepy in Seattle

Dear Sleepy: YES, years ago, Katie discovered this great Duvet called The Hayes Nova two years ago. Read her post here. We’ve included a picture of it above. Pretty cool, hunh? It’s essentially a duvet that LOOKS like it has a sheet folded over it — a duvet that looks like a made bed. You might wonder why this simple “trick” would help your dire situation. But, as with any organizing chore, the trick to making it easier is to reduce the amount of steps to accomplish it as close to 1. 1-Step. SO this duvet eliminates at least four steps.

First, you’ve got to pull up the sheet on both sides of the bed, then once you’ve pulled up the duvet, fold over the top sheet on top of the duvet on both sides and THEN make sure it looks nice by smoothing it out. This is likely 4-5 steps. Now, as for the plethora of pillows, good luck getting it down to 4. I’d start your bargaining at 5 pillows and then likely you’ll end up with 6. The key is having 4 pillows plus only one or two decorative ones. All our best, Katie & Kelly