Some may think that OCD, or Obsessive Compulsive Disorder, may be helpful when it comes to staying organized. It is true that certain aspects of OCD allow people to be more conscientious, and therefore more prone to paying attention to details, for example. However, depending on the severity of the disease, OCD can also prove crippling, because in the eyes of the person with the illness, everything must look a certain way in order for them to feel okay. Pictures must hang exactly straight, pillows must remain in a certain position on the couch, silverware must face a certain way when put into a drawer, etc. 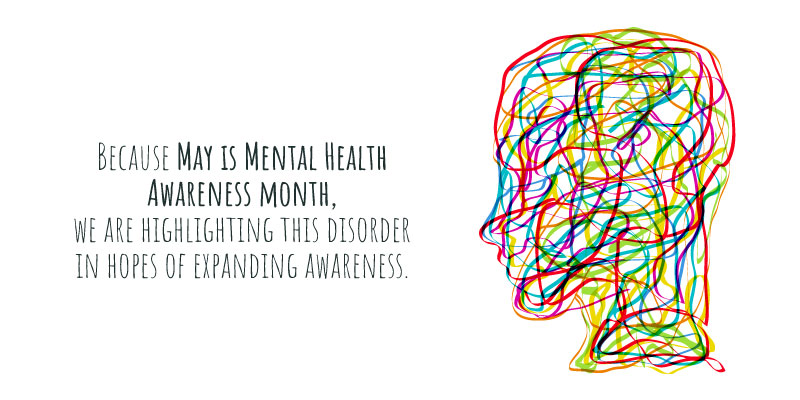 Because May is Mental Health Awareness month, we are highlighting this disorder in hopes of expanding awareness and painting a real-life picture of what the illness looks like to those who may not know. OCD is a real disease with real struggles and consequences, and can be quite hellish for those who suffer from it. For the sake of those who may not know much about it, we will go through a quick summary of OCD and its symptoms. Based on those facts, we can shed some light on how one with OCD can best, and most effectively, organize their home.

Individuals who have OCD feel compelled to perform repetitive actions called compulsions, or rituals, in an attempt to relieve the distress caused by the obsessions. For example, a person with an obsessive fear of intruders may check and recheck door locks repeatedly to ensure that no one can get in. Compulsions are frequently overt – something we can see. However, they may also be carried out mentally, such as mental praying or counting. And although we can’t observe them, mental rituals can be every bit as debilitating as those we can see.

Although most people with OCD realize their obsessions are irrational, they believe the only way to relieve their anxiety or discomfort is to perform compulsions. Unfortunately, any relief provided by the compulsions is only temporary and ends up reinforcing the obsession, creating a gradually-worsening cycle of OCD behavior. 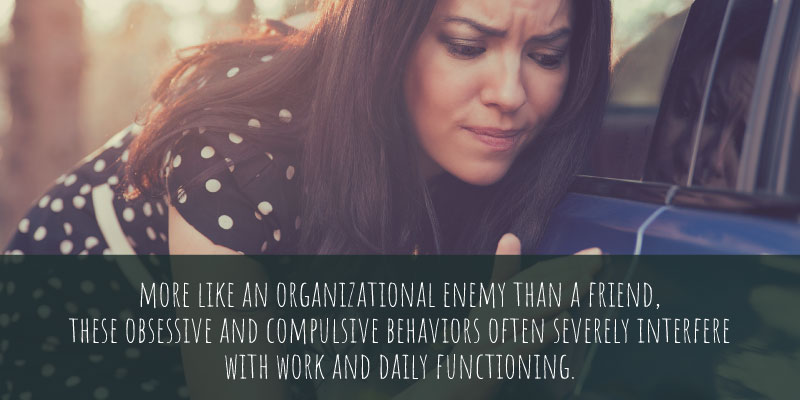 This description certainly makes OCD sound more like an organizational enemy than a friend, especially considering that these obsessive and compulsive behaviors often severely interfere with work and daily functioning. To further delineate between what is OCD and what is merely fastidiousness (the two terms are often interchangeable to those who are not educated in what the disease actually consists of), we will go through a list of behaviors that are not considered to be OCD related.

There are several types of OCD, each with their own set of symptoms. Here are just a few examples of how OCD can manifest itself in one’s life. We’ve highlighted the first three and linked them to informational OCD websites. There, you can find explanations for other types of OCD. 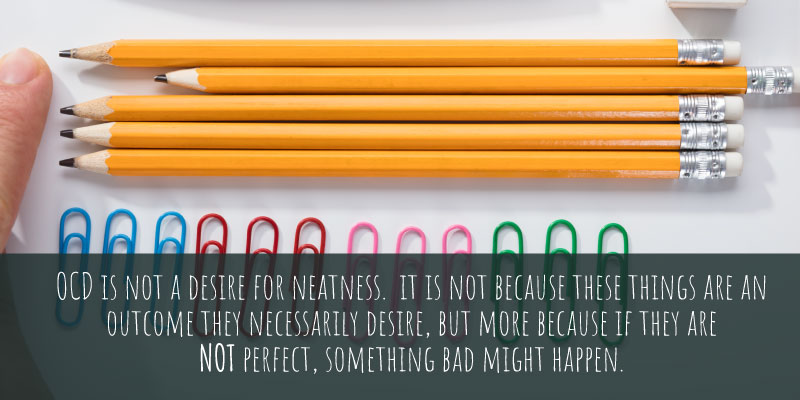 OCD is not a desire for neatness. OCD is not a ‘healthy’ obsession with a celebrity or activity, nor is it a ‘teen crush’ type of situation. If OCD manifests itself in keeping things in perfect order, perfectly aligned, perfectly clean, or perfectly organized, it is not because these things are an outcome they necessarily desire, but more because if they are NOT perfect, something bad might happen. This is what someone who suffers from OCD might feel if things are slightly awry organizationally. As said above, there are several types of OCD, and none of them involve being a ‘neat freak’.

OCD is also often confused with OCPD, otherwise known as Obsessive Compulsive Personality Disorder. OCPD is listed as having the following characteristics:

This might sound a bit similar to our description of the Classic Structure (ESTJ, ESFJ, ISTJ, ISFJ) personality type we outline in our book. However, though we do see Classic Structures as having these qualities to a certain extent, they are to a much lesser degree than a person with OCPD.

Although the term is thrown around to describe being anal retentive about organization and cleanliness around the house, OCD is actually a very serious disorder with very uncomfortable and unpleasant ramifications if gone untreated. If you suspect you or a loved one might suffer from OCD, seek professional help and know you are not alone. OCD afflicts around 2.2 million Americans over age 18, according to the NIH. There is hope, and help, out there. We encourage those who suspect they might have a problem to get screened for OCD and then set up a treatment plan with a health provider. There is no reason that anyone with this disease should suffer in silence, in isolation, or a minute longer than necessary.