Let’s face it: For most people, purging is not a fun activity. First off, it’s labor-intensive. Second, it can include getting rid of items that we’ve become attached to, but no longer necessarily ‘fit’ into our homes or lives. We talk about Later Boxes in our book, and those are for these very items — the ones you feel like you just can’t let go of. But we’ll get to those later in the post. For now, we’ll discuss why everyone — and we mean each and every one of us — needs to purge at least once a year. Clothes go out of style or no longer fit. Paperwork becomes obsolete. Clutter builds up. And we cannot have clutter and expect to stay organized. So in reality, purging is the first step to getting your home, and your life, in order.

The key to a proper purge is to be ruthless but thoughtful at the same time. Think that’s an impossible balance to strike? It might seem so, but if you follow these simple rules, the process becomes easier.

Chances are, if we are on the fence about something that is contributing to a clutter build-up in our home, it’s a sign it’s not that important to us in the first place- it needs to be tossed. Consider the clothing issue for a moment. Many of us hold on to clothing that no longer fits or has long gone out of style, merely because we don’t want to take the time to sift through our entire wardrobes and separate them into three piles: Sell, Donate, Toss. It’s that easy. It may take a while, and you might need a ruthless fashionista friend to help you along the way, but it can be such a relief to purge a closet filled with things, half of which you never wear anymore. Focus on those three piles. Donate to Goodwill, Sell to a consignment shop or Tradesy (online), and toss the absolutely unwearable things (we’re talking stained, torn, or otherwise damaged pieces) into garbage bags and put them out for the trash. 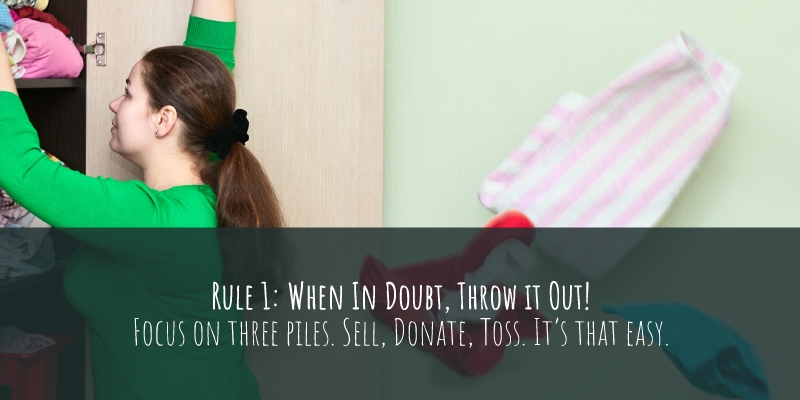 If you are someone who struggles with getting rid of that old mug your 6 year old made back in 1990, or your now 35 year old’s christening or bat mitzvah dress, we have a solution. Later Boxes are merely storage boxes where you can put items that you simply cannot part with, seal them up tightly, and put them in the attic or garage for a year or until you decide what to do with them. Heck, they could stay in storage forever, just as long a they are out of your living space. While you don’t want to accumulate too many Later Boxes, this is definitely a good option for those who detest purging or letting go of anything.

Sure, you’ll want to hold onto your tax forms for at least seven years, but things like old telephone or doctor’s bills that have been paid need not take up space in your inbox. Consider scheduling a ‘Paperwork Purge’ every month or so in order to keep your inbox, cubby, or briefcase neat, tidy, and up to date. A paper shredder can come in handy for this particular type of purge. 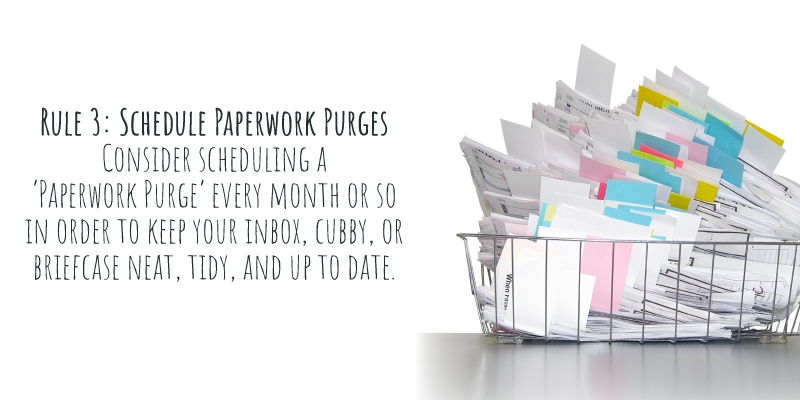 Rule 4: Be Honest With Yourself

Ask yourself how much or how often you actually use a thing before tossing it. If it’s broken beyond repair, that’s a sure sign it’s junk and you should get rid of it. It could be your husband’s favorite biking shorts that are riddled with holes, or it could be the rusted out lawn mower that’s been sitting in the garage for two years, untouched. If it isn’t useful to you, why keep it? Especially if it is taking up valuable space. Call 1800-GOT-JUNK. They will come and literally take whatever you want to throw out and cart it away for you for as little as $139.00. When you think about having to haul your junk to the dump yourself, this seems like a pretty decent deal.

Rule 5: Break Up the Task Into Pieces

Just as they say with moving into a house, go room by room and focus on one space at a time. Purging can be completely overwhelming if you start thinking about every little thing you want to get rid of. Start with your entryway, and then get more specific by starting with the entryway closet. Any old winter boots that no longer fit in the depths? Toss. Separate rooms into sections, and go through each section thoroughly. As well, try not to fit a purge into one single day. Purging can be emotionally and physically exhausting, so make sure to space out your various purges appropriately.